As many of our Facebook followers have been hearing about over the past year or so, we have a unique, and incredibly cool, new crested gecko morph to introduce to the Crested Gecko community.

What exactly is a Soft Scale and a Super Soft Scale? 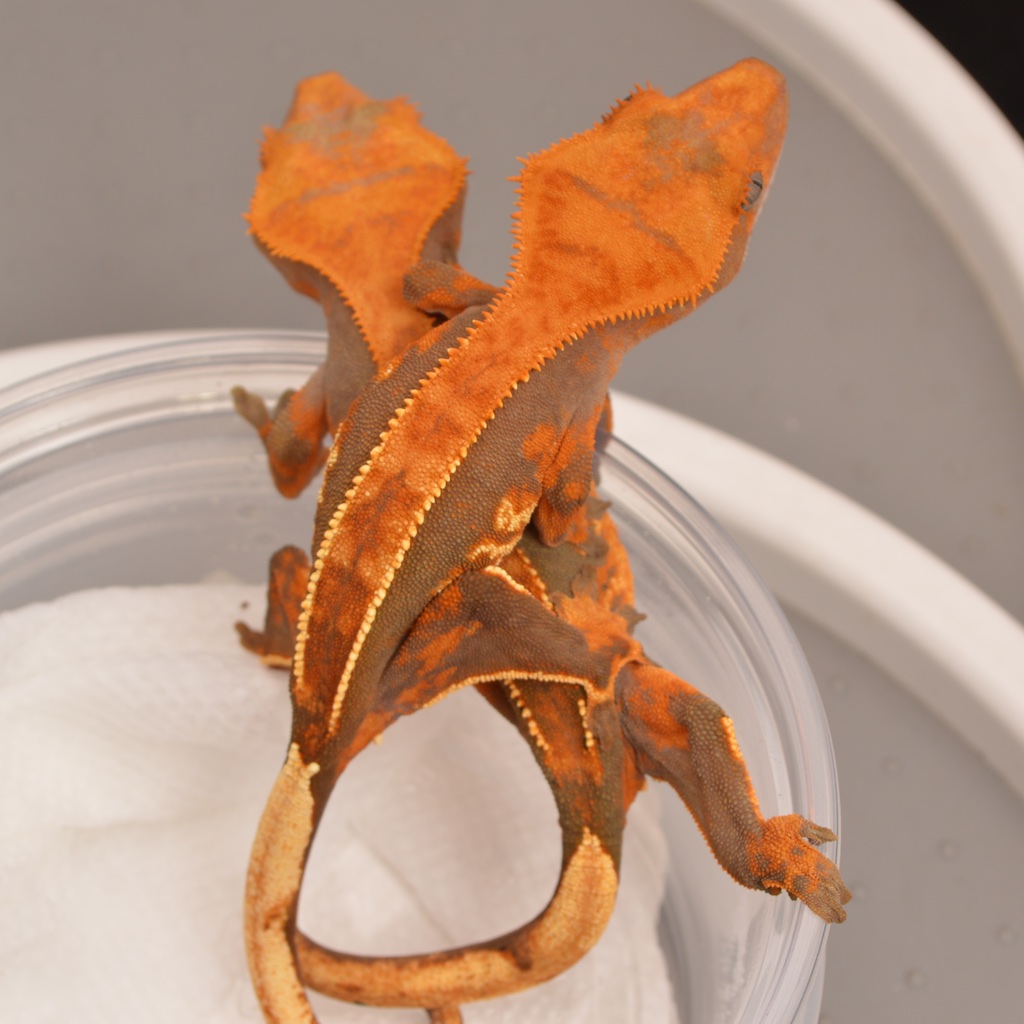 For years I wasn't sure, physically, what exactly it was causing these geckos to look and feel different from anything else I had seen. Upon examining some professional macro photographs, and looking at some of the more extreme examples of Super Soft Scales under a photographer's loupe, it appears these geckos exhibit fewer bumps or "scales" on their skin, leaving more space between. On pinstripe pattern scales along the dorsal crests, things can vary a bit. On some geckos the pinstripe scales seem to flatten and somewhat enlarge in diameter, while on others, the pinstripe scales seem to be of normal shape and size, but they're far more spread out. Our famous Harry Lineage's structure is a big part of the founding group of Soft Scales, so I think that gives us a bit of a wildcard, and is probably why we seem some variation in the way pinstripe scales are arranged or shaped.

There's a lot more going on with the Soft Scale and Super Soft Scale morphs than just the softer feel and the odd scalation. The color is generally enhanced and cleaned up, often making orange, red, and yellow pigments appear brighter than what you'd see on a non-Soft version of that crested gecko. Another strange thing we're noticing is the appearance of a dark grey or black ring around the edge of the exposed part of the eyeball. Some geckos even have more of a steely grey eye color, rather than the warmer coppery tones we normally see. 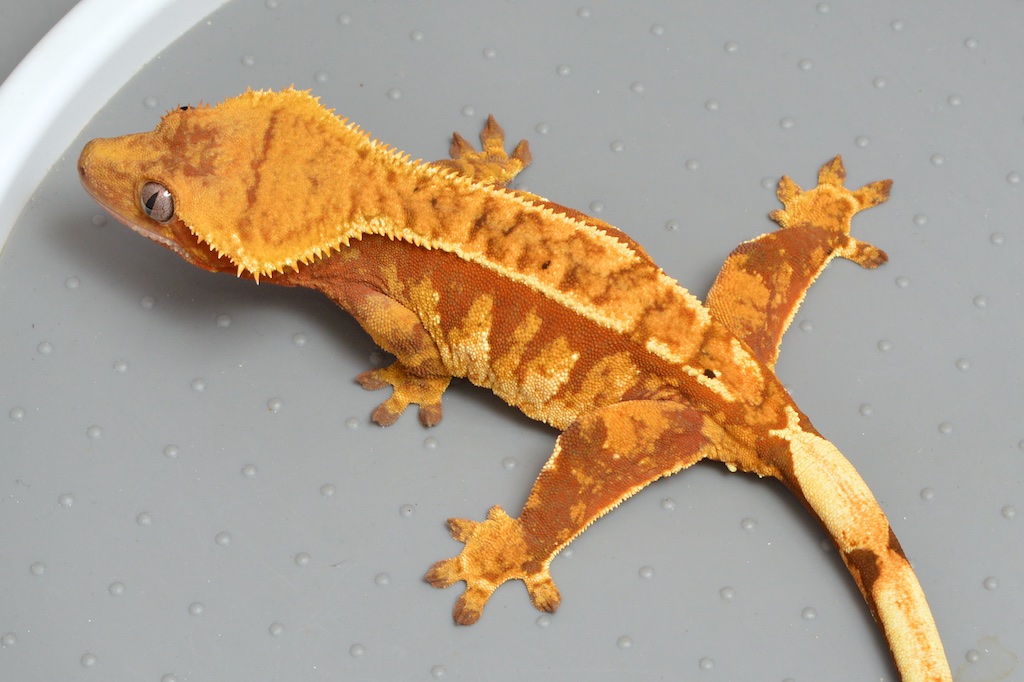 The existence of a "Super" form of the Soft Scale, and how easily it is reproduced, is really what makes this project special.

Do I have a Soft Scale?
Chances are, I leaked some Soft Scales without knowing it over the past decade. I have no doubt there are some unidentified Soft Scales floating around in the hobby, but the thing is, it can take a well-trained eye to spot them. Even then, it will take a minimum of 2-3 years before you can produce a Super Soft and can say with any certainty that you have true Soft Scales - and to do it that quickly, you're going to be breeding siblings and/or parents together. We've bred these into various projects over the course of many years, and are able to start offering largely unrelated Soft Scales from all of our various projects.

While there may be geckos out there who feel soft, or have some of the other traits I mentioned, the true test to find out if a gecko is a Soft Scale is to breed it - that's how it was done here. If a gecko produces Soft Scales when bred to an entirely unrelated gecko, you will need to breed two of those geckos and then produce Super Soft Scales to know for a fact that you have a Soft Scale.

How to produce the Super Soft Scale
As I've touched on earlier, the Super Soft is far more extreme than the Soft Scale, at least by the time they reach adulthood, and it only takes two Soft Scales to produce some Supers (giving you genetic odds of 1 in 4). The Super Soft Scale, in my professional opinion, appears to be the homozygous form of what's referred to, in the reptile hobby, as a co-dominant genetic mutation (although my fellow python morph breeders could make a good case to call this a recessive trait since the soft scales can be hard to pick out and could be considered somewhat-visual "hets").

The Super Soft is produced by simply breeding two Soft Scales together - not years and years of line-breeding. We are currently doing some controlled test breedings with completely unrelated breeder geckos, in order to verify the genetic mode of inheritance, but after having spent over two decades (which is over half my life - I'm not that old!) in the world of python morphs, I'm quite confident that's what we have here. 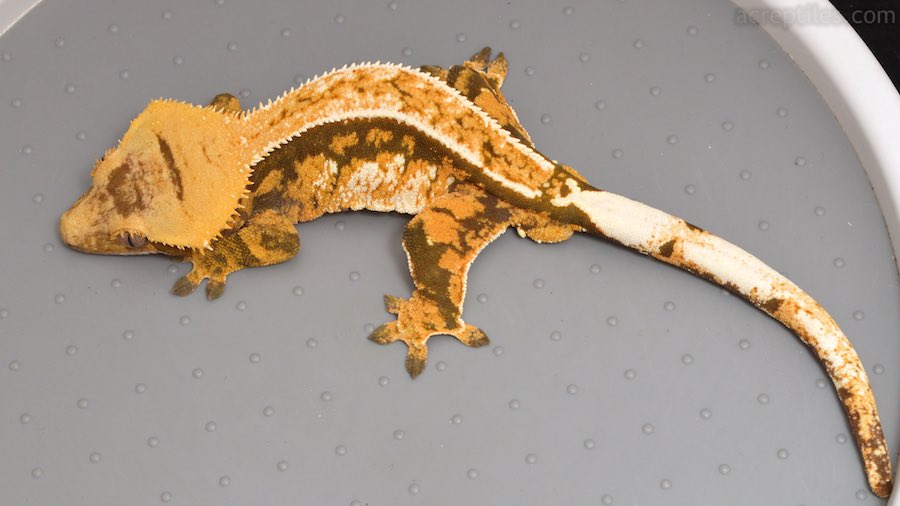 The Soft Scale Story
This is a project I have been working on since I acquired a clean/pretty chocolate colored female Soft Scale in 2004 from a wholesaler. I immediately noticed a difference in her look and feel, and I decided right then that I would at least hold back all of her offspring for the first couple years to see what happens. Being a big reptile morph guy since I was a teenager, I had seen the introductions of variou bearded dragon and colubrid morphs with similar appearances. Because I was aware of those, this morph, fortunately, didn't just slip through my fingers when I encountered it.

Since it was a unique scale structure or texture that I hadn't seen (or felt) before, I decided to breed her to Harry, an unusually spiny/shaggy looking male that matched her color and pinstripe pattern. I figured that way I would have two unique "side projects" in one, and regardless of how soft the soft scales got, Harry's DNA would provide me with the best chance of maintaining great crest structure with the Soft Scales. The softness was indeed inherited by several of the first generation of Soft/Harry offspring, and we got some nice examples of Harry's structure as well.

For several years I went about my business, crossing those geckos into other lines of Pinstripes and keeping all soft scales, which I did for a very long time, before finally breeding Soft x Soft and producing the first Super Softs.

Fun Fact: The Whiteout lateral markings that I developed within my colony, which also come in an Extreme/Super form that some people call "Whitewall" markings, actually started with geckos descended from the very first Harry x Soft Scale pairing. In fact, for years I thought Whiteout/Whitewall markings were part of the Soft Scale morph, but later found out they are inherited separately. In reality, it was my attraction to the Whiteout markings, and wanting to breed them to all my projects, that has made the Soft Scale morph so prominent in my collection over the past several years. 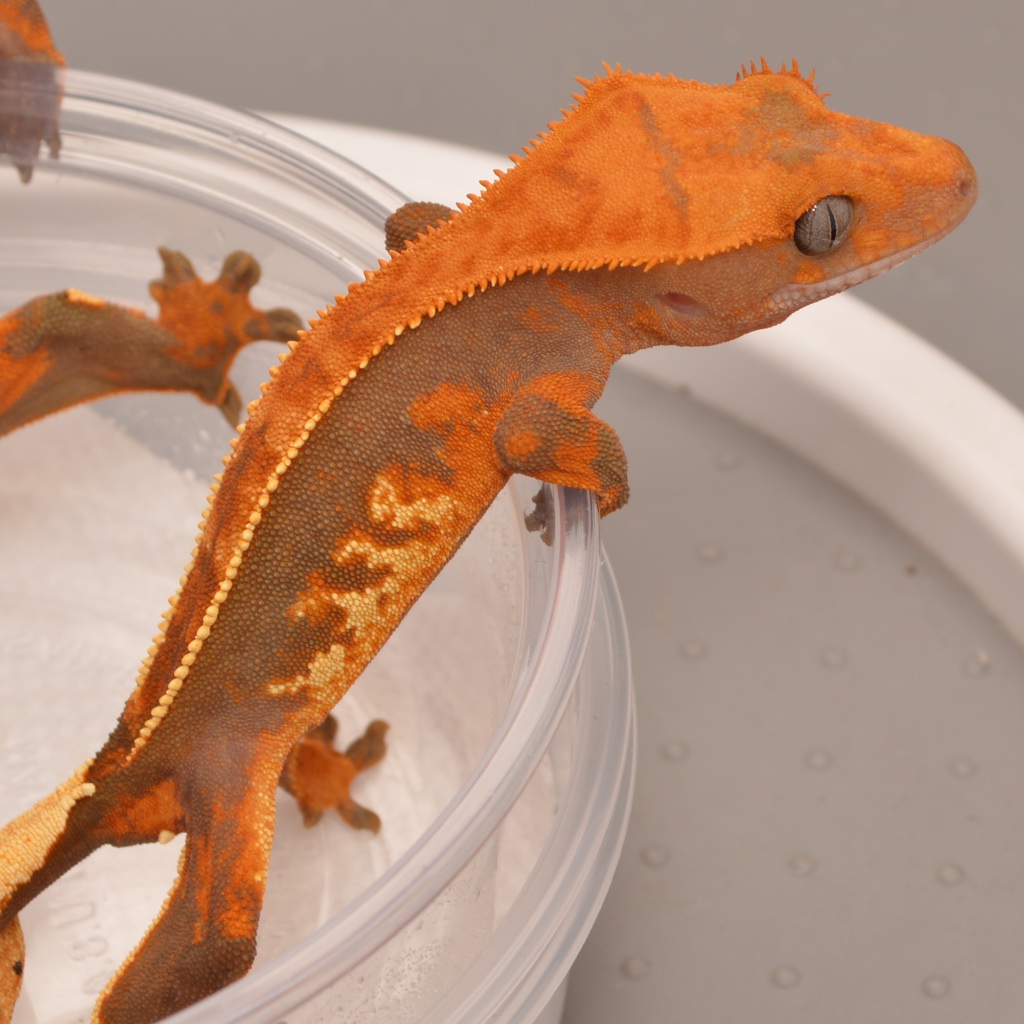 Then came the Super Soft Scales...
When the first few Super Softs hatched, just a few years ago, I was pretty impressed - I thought we were finally getting somewhere. By the time these geckos had reached 20 grams I was in complete and utter shock. We weren't getting somewhere, we were THERE, and line-breeding wasn't how we got there. You have to understand - on the Supers, it's not like they just got a double dose of the Soft Scale trait - it's like a quadruple dose. Unlike most Soft Scales, which you need to see up close, or even touch, to appreciate, the Super Soft form is extreme and different enough to recognize from across the room. Very extreme, very soft, and even the color can be affected, sometimes drastically brightened and cleaned up. The most impressive part about the Supers is that they're not something I had to selectively breed for over 5-10 generations. That's HUGE, not only for moving the project forward, but for the crested gecko market/hobby as a whole. Something this cool and this easy to reproduce is bound to be wildly popular, and it will bring popularity to other projects that combine well with the Super Soft Scale look. Not only that, I think the Soft Scale project is going to generate some major interest outside of crested gecko circles. 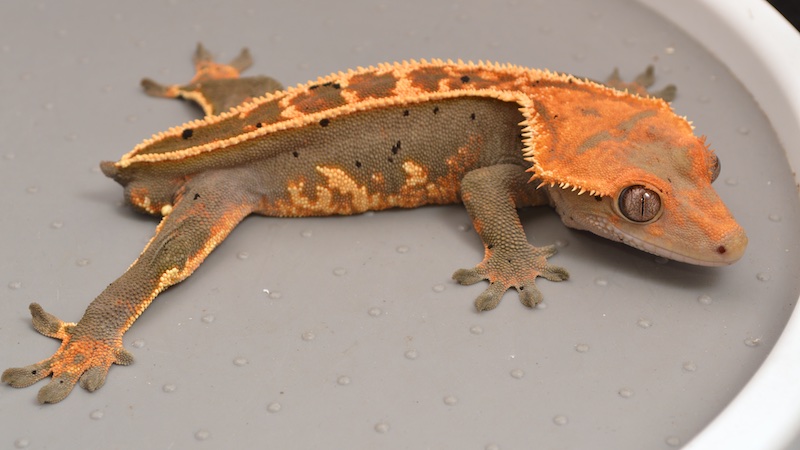 The above gecko is a Super Soft Scale from the original Harry x Soft Scale lineage, but was produced many generations into the project. He looks like a highly refined version of Harry himself, and he's a Super Soft. Very nice example of both. Notice he also has Whiteout lateral markings on his sides. The dark rings around the eyes, which are attributed to the Soft Scale trait/gene, are also quite evident on this particular gecko.

The gecko above is a Super Soft Scale Red Extreme Harlequin. She also has Whiteout lateral markings, although they're pretty fragmented due to the Extreme Harley pattern. Also notice the textbook Harry line structure. One of my favorite geckos of all time. This particular lineage is still incredibly rare and will not be released for another several years. 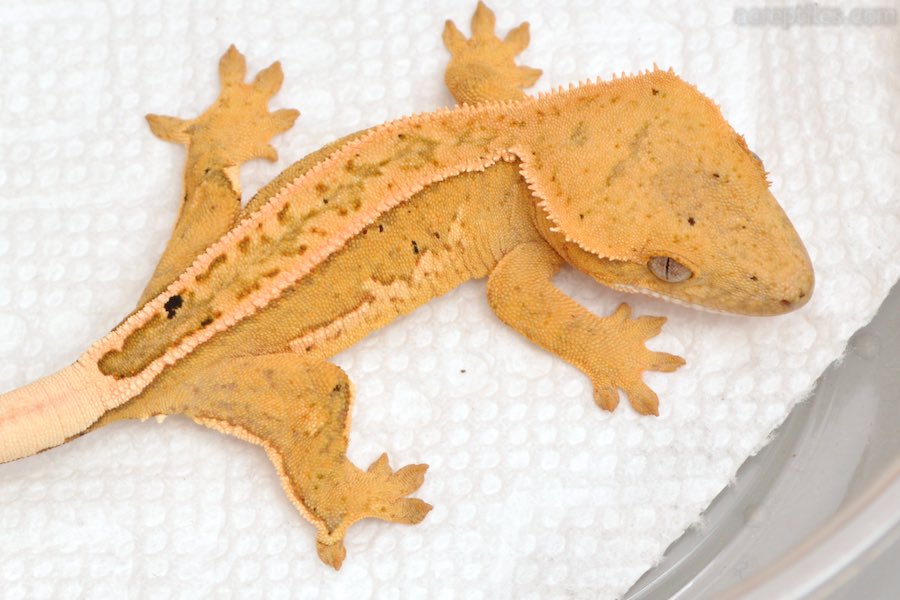 Above is an incredibly exciting hatchling. This is a Super Soft Scale Tangerine x C2 Citrus line Yellow-Orange Quad Stripe. This gecko is absolutely gorgeous in person - pink, orange, and cream. 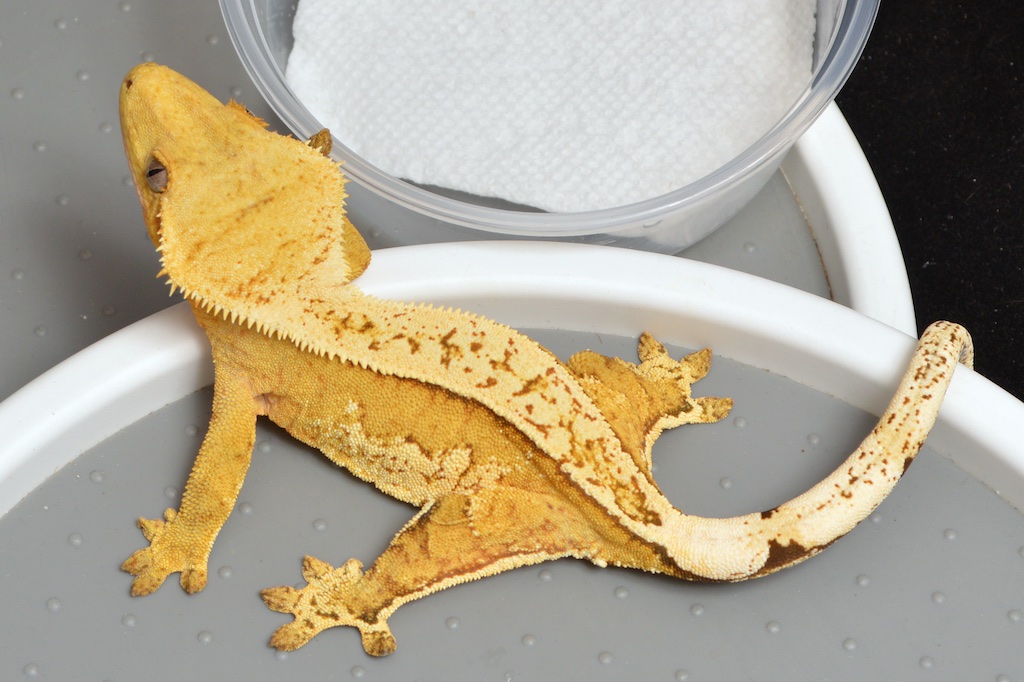 This is a Soft Scale Extreme Whiteout Yellow-Orange & Cream Pinstripe. This is a great example of what can be done when the Soft Scale gene is bred into an already clean/bright colored lineage. Although not particularly obvious to me at first, her feel in the hand made it plainly obvious what she was before I even bred her. Geckos with color like this are a big part of why the Soft Scale project is going to be huge. 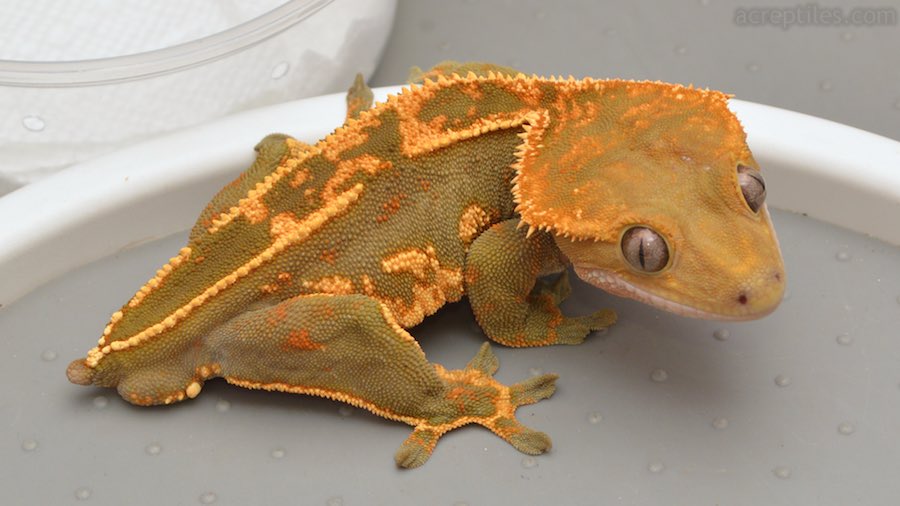 This stunning gecko is a product of the original Harry x Soft Scale lineage and our Tangerine x Lavender lineage, hatched here in the past couple years. You can see he has a bit of a green tinge to him, and a ton of Tangerine pigment. This is a particularly strong visual example of the Super Soft Scale structure and of Tangerine pigment. On top of being a Super Soft, he's spiny due to Harry's DNA. Very excited to see where this guy takes us. 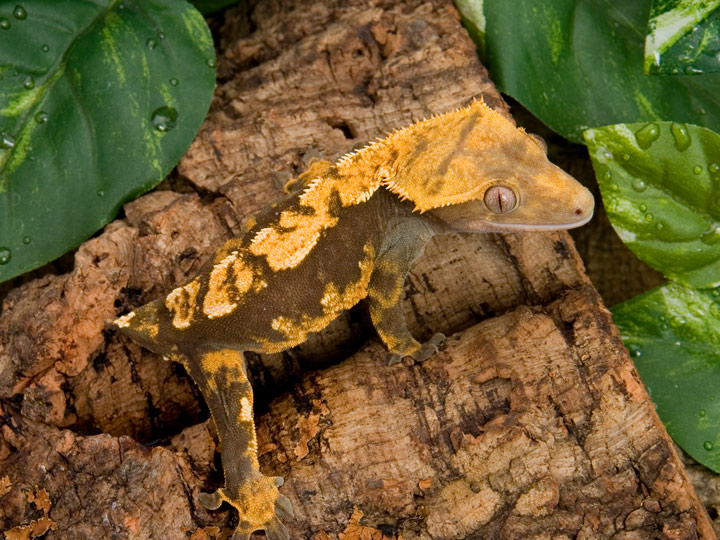 This is a first-generation Soft Scale produced by Harry and the original female Soft Scale, way back in 2005. Not only was she gorgeous, but that structure took zero selective breeding effort - first generation Soft Scale. Had I known then what I know now, this would have been my first indication I had something special. She was one of the very best examples of Harry's structure on any of those first generation Soft Scales, and she is still here to this day. She was an instrumentally big step forward in both the Harry lineage and in the Soft Scale project - I just didn't quite realize it at the time. Though I could tell she was soft like her mom, I didn't think it was different enough to be marketable. The Super Soft Scale obviously changed that.

*Male Super Softs are currently more valuable than females due to how many offspring they can sire.