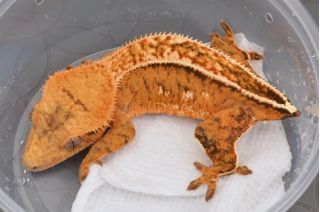 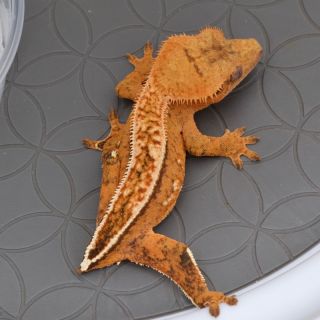 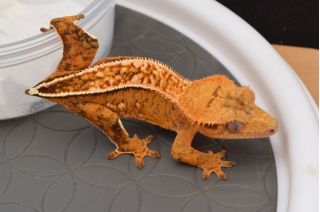 Unless you've seen our Tangerine and C2 line Soft Scales in person at a Tinley show (either at Pangea's table or ours), or you're one of the few breeders who already own one, then you have most likely never seen orange like this on a crested gecko, and you probably didn't even realize it was possible to get it this bright/clean.

If you look closely, you'll se a pinkish orange tint (Tangerine pigment) tinting the white lateral markings, and you'll also notice the muted grey-black reverse pinstripe markings and Tiger markings. All that combined with some of the most clean/intense orange you've ever seen on a crested gecko makes for one of the most visually impressive Tiger Pinstripes I've ever seen, let alone offered for sale.

We're just now starting to offer colorful Soft Scales like this one for sale, and we're still holding the majority of them back as future breeders. The color we're starting to see from the Soft Scale project (not the soft skin and grey/blue eyes) is ultimately what will solidify the Soft Scale as an important morph in any collection.

Co-Dominant Genetics
I have spent over half my life following (and breeding) genetic morphs in pythons, boas, and other gecko species, and have a very strong background in reptile morph genetics - in addition to over a decade of playing with the Soft Scales. At this point, I am quite certain this is a co-dominant morph. While we're still doing some final independent testing to confirm that the Supers are indeed true genetic Supers (the homozygous form of a morph), we do know it's at least dominant, if not co-dominant.