This page is here to tell about how I got started, what my business is all about, and the basics of what we do here.

Thanks for taking an interest, and be sure to get in touch if there's anything we can do for you!

The History of ACR 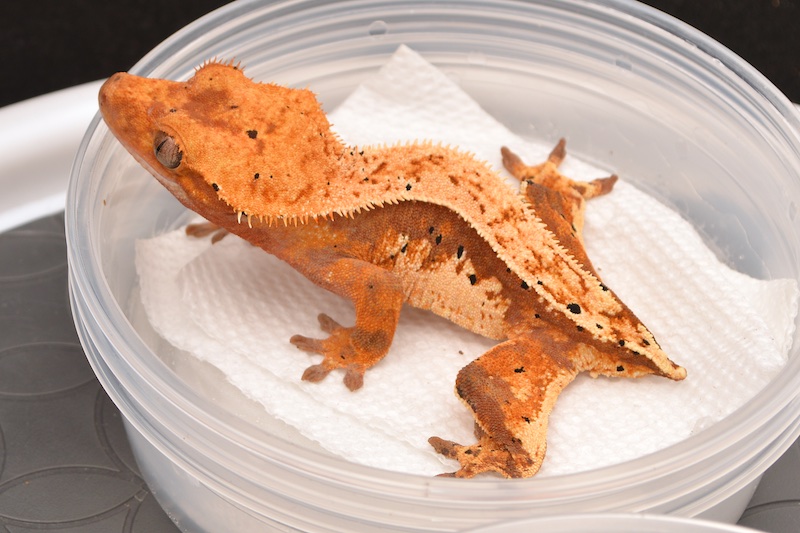 I have been catching or keeping reptiles for most of my life now. I caught every frog, toad, or snake I could get my hands on from as early as I can remember (pre-school age). Keeping reptiles in a cage started with a couple green anoles that I got as a birthday present at the age of seven, followed shortly after by a Hemidactylus turcicus, or Mediterranean House Gecko. I had a pretty decent little collection of native Missouri frogs as a kid, at one point, which were kept in various terrariums in the basement. I finally graduated to snakes by 8th grade (couldn't get the OK from Mom before then), and I had raised up a fairly big Burmese python from a hatchling by my senior year of high school.

In 1998, about 18 months after graduating high school, I was forced to sell off the few reptiles I had. I was going to community college, working full-time, and still living at home. In 2001, shortly after I moved out of my parents house, I began putting together my existing reptile collection, starting with python morphs. It wasn't very long before the idea of doing this for a living started swirling around in my head. It just didn't sound like a very do-able idea, at least not yet.

I got my first crested geckos in late 2002, began breeding them in 2003, and I absolutely fell in love with the species for a variety of reasons. Being a graphic artist and website designer by trade (at the time), I quickly became obsessed with producing designer crested geckos, an idea that almost no one had really given much thought, but something I saw as inevitable. Having seen it happen in many other species, I saw this as something that was bound to happen. Someone just needed to put in the work to develop these geckos and then put them on the market, so I decided that's what I was going to do. In 2004, after leaving Gateway, Inc. (the computer company I had spent 5 years working for), and quickly having seen how the popularity of crested geckos was growing, I made the decision to breed reptiles full-time, and to focus on designer crested geckos. Needless to say, none of my non-reptile friends really understood, not to mention actually thought it was a good idea, but they didn't know the crested gecko, not to mention the designer reptile market and genetics, the way that I did. Since those early days, my collection has grown to thousands of geckos, and I've developed projects/traits, and coined names for many of them, which have become household names today.

Today we operate our breeding facility (indoor gecko farm) from a 3,000 square foot warehouse, located in Missouri, USA. The office is still run from my home for the most part. To my knowledge, we are the world's second or third largest producer of crested geckos in numbers, and the largest in overall crested gecko revenue and retail crested gecko revenue.

Why did I choose the crested gecko?

A lot of reptile friends ask what made me decide to focus my efforts on a new species, rather than one that people were already making a lot of money with. Here are my main reasons, in a nutshell...


15+ years of "Quality Over Quantity" produces "Quality in Quantity" Today 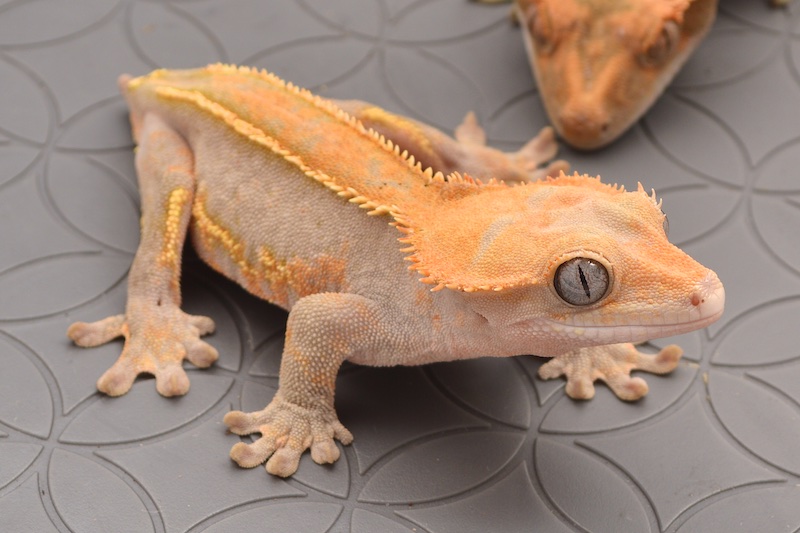 If you're under the impression that we're just a mass producer, you've been seriously misled.  Some would-be competitors, and other online personalities, have misleadingly asserted that ACR is "just a mass producer", implying that our geckos somehow aren't high-end geckos because of the numbers we produce. The fact of the matter is every single thing we do revolves around selective breeding - not money or numbers.

First of all, every project in my entire collection was developed here from scratch, starting with the basic morphs available 15-20 years ago. Remember that crested geckos were previously considered extinct, and had only been readily available on the reptile market for a few years, back when I started.

Fun Fact: There wasn't even such a thing as "gecko diet" on the market (we used yogurt and baby food), let alone half a dozen brands from which to choose.

We only raise up geckos that will further our selective breeding efforts or genetic diversity - and preferably both. We never keep and raise geckos in order to have a certain number of breeders. Also, it has never been about keeping prices artificially inflated, either by limiting how many nice geckos we produce or lying about production numbers. It has never been about producing X number of geckos, but about how they look.

I have been doing this for a living for 15+ years now, without ever getting rid of old breeders, even when a project has moved several generations forward. With this approach, the high-end geckos of generations past slowly become the pet store geckos of today. I firmly believe putting nice looking, but no-longer-rare, gecko morphs in stores because it will further the crested gecko hobby as a whole. The better looking the pet store geckos are, the more chances people will take an interest in crested geckos.

The large production numbers we see today are simply the byproduct of 15+ years of selective breeding efforts without selling off our old breeders. We have been refining our projects, and constantly outcrossing to start new bloodlines/projects, for over 15 years now. I've also built relationships with various pet shop distributors as we grew. Today, wholesale buyers take the bottom 90% and we keep the best 10% or so to sell direct to the public. That means that when you're buying a gecko from us, you're buying one of the nicest geckos available from that particular project. You can buy our bloodlines just about anywhere, but you can only get the top 10% of what we produce from us (or someone who bought high-end babies in wholesale from us).

One benefit to having a large number of geckos is that we have lots of options when it comes time to select our future breeding stock. Having so many options makes selective breeding projects move forward faster than ever. For example, if I find that a particular pairing produces an appearance that I like, I can almost immediately put together several unrelated breeding groups, and end up producing hundreds of unrelated, but similar looking geckos within a matter of a couple years, which I can then pick from for the next generation breeders. Back in the day, it would sometimes take years to put together a single breeding group - the Tangerine project was a prime example...took me 3 years to get a male like the original female. Large numbers also gives me the luxury of being able to try more crosses and pairings, ultimately enabling me to discover more looks that I like. Finally, there's the fact that new alleles (or mutations of a particular gene) do surface out of thin air, and we're producing thousands of geckos annually - that said, we're bound to have entirely new alleles (or versions of a gene) appear from time to time.

Bottom line, if anything, the numbers we produce only help with the selective breeding process, and with genetic diversity. This is why we have always had new projects and bloodlines hitting the market faster and harder than anyone else. 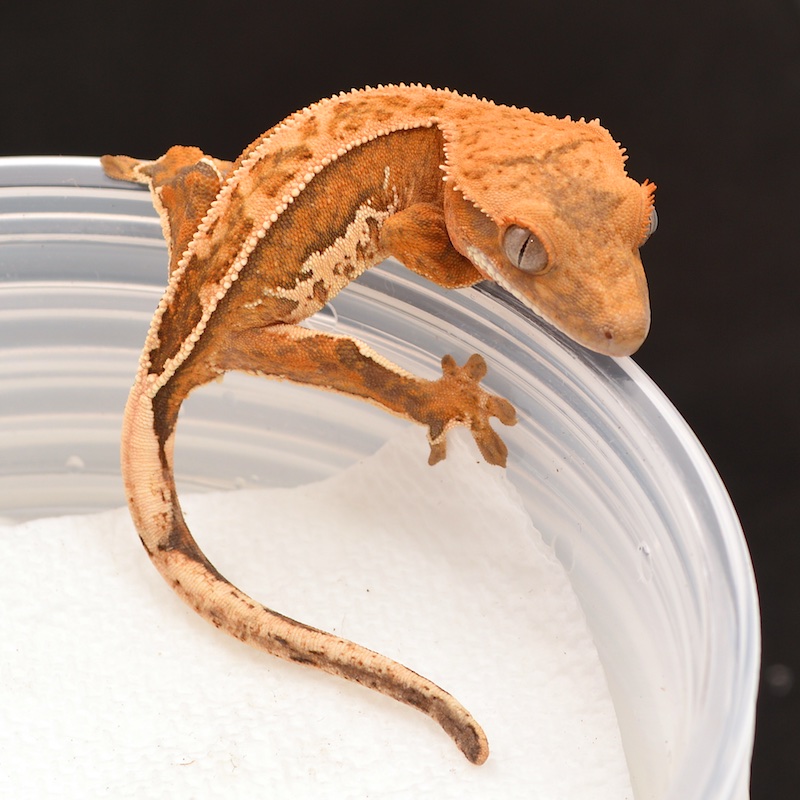 I strongly encourage you to take a close look at the geckos we're selling and compare them to the geckos other breeders are selling, and you'll see that we're anything but a commercial/wholesale "mass producer". Selective breeding and genetic diversity will always take priority over volume here, and anyone who says differently simply doesn't know what they're talking about.