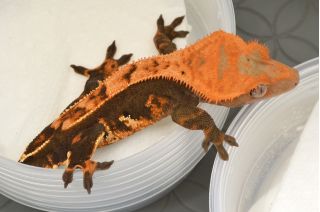 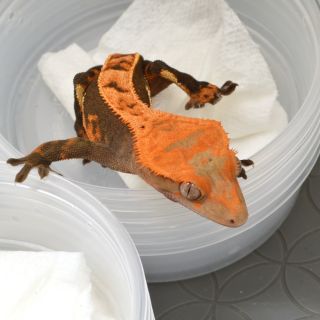 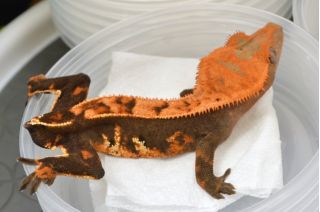 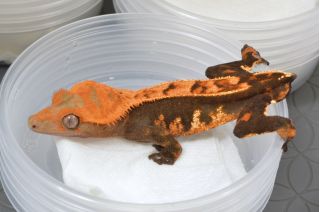 Tri-Color Soft Scale (possibly a Super, but not 100% sure) from one of our outcrossed Area 51 groups that consisted of geckos I suspected of being soft scales.  Sure enough, we got Supers and learned how to identify soft scales in lines we hadn't worked them into before.  This guy is not as soft and velvety as some of the other Supers we've produced, but he has the head blotch.  This guy is from two consecutive outcrossed Harry/Soft line pairings and about 3 generations removed from all of our other Soft Scale project geckos, so if you're looking to put some genetic diversity into your Soft Scale project, this is a unique opportunity.  He's either one of the most extreme Soft Scales I've ever produced, or he's one of the lowest expression supers...and I'm not quite sure which it is. :-).

If he is a Super Soft, that's not a subjective thing - genetically speaking, you'll know what he is upon breeding him because he will produce ALL soft scales and/or supers (depending on the female) if he's a Super.  If he's not a Super, there's a silver lining there too...you'll be well on your way to making some incredibly extreme Super Softs...because if he's just the nicest Soft Scale ever and NOT a Super, then the Supers he eventually makes will be next level stuff.  Either way, this guy is a great buy because I can't say for sure what he is.

PS - This is exactly the kind of stud male I would look for when I was starting out in ball python morphs...try to get something extra nice that might end up being more than I'm actually paying for! :-) -AC

Want to combine combine shipments with another order?
Our flat-rate $39 shipping charge covers an unlimited number of reptiles and you can combine an unlimited number of orders/reptiles for a single $39 shipping charge. If you would like this order shipped with another order that you've already paid for shipping on, just choose the Ship With Existing Order as the shipping option when you check out.